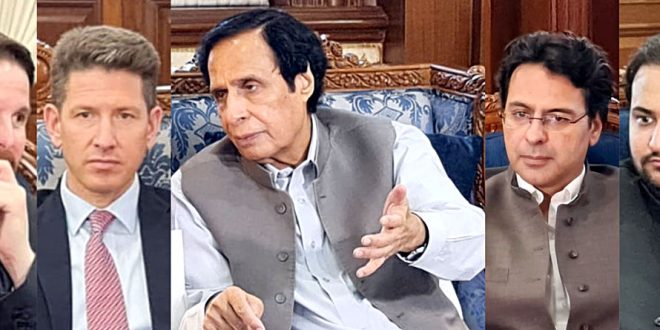 PML-N has robbed the mandate of millions of Pakistanis, we reject illegal and unconstitutional elections of CM Punjab: Ch Parvez Elahi

History do not pardon those responsible for such events, British High Commissioner endorses stance of Speaker Ch Parvez Elahi

Ch Parvez Elahi said that April 16 election of Chief Minister Punjab is illegal and unconstitutional and we reject it. He said that N-League has robbed the mandate of millions of Pakistanis, massive gatherings of the people in Imran Khan’s public meetings is expression of no trust on the unconstitutional rulers, for all Members of the Punjab Assembly and leaders this is a moment of thinking that what has been done for the welfare of poor people of Punjab, beating up an MPA or causing grievous injuries, does it amount anyone’s welfare?, people of Punjab and the MPAs will continue putting this question to the political parties.

Speaker Punjab Assembly said that Punjab Assembly had worked very successfully during last three and half years, previous government formulated the best policies for external investment in the province.

Endorsing the stance of Speaker Ch Parvez Elahi on CM Punjab election, the British High Commissioner said that the history do not pardon those responsible for such events. Paying tributes to Ch Parvez Elahi, he said that as the Chief Minister Punjab your services for the province will always be remembered, you did lot of good works particularly for the minorities which have benefitted all minorities, approval of the laws regarding the minorities has restored the confidence of all western countries and European Union.

During the meeting exchange of parliamentary delegations was agreed upon and it was decided that such joint research should be undertaken which should benefit the common man and the farmers. Dr Christian Turner also appreciated legislation regarding welfare of the people. The Speaker conducted the British High Commissioner on a visit around the new building of the Punjab Assembly, House, library and other sections and also apprised him about composition of the assembly, parliamentary traditions, working of the Standing Committee.