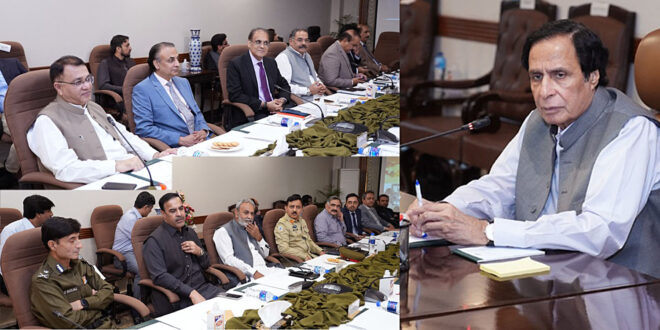 He was chairing an emergency meeting to review the flood situation and the relief operations in Rajanpur, Taunsa and DG Khan.

The CM directed to deliver the financial aid to the flood victims as soon as possible adding that damages to houses, crops and livestock will be fully compensated. A survey should be started as soon as possible to recompense for the damages, he emphasised. Additional funds will be provided to help and fully compensate the flood victims for their losses, he assured. He asked the SMBR and DG PDMA to leave for flood-hit areas today and ordered the constitution of the cabinet committee for disaster management without delay. An emergency plan should also be devised to restore flood-hit roads and all arrangements should be completed in DG Khan, Taunsa, and Rajanpur. Necessary equipment and food hampers should be delivered in large numbers to the affected areas; he said and asserted that the Punjab government stands with the flood-affectees.

The CM also directed continuous monitoring of the water released by India and added that a plan be devised by the secretary irrigation department to store this precious water. I am also grateful to the Pakistan Army for its timely help and assistance in the safe evacuation of the people; he said and thanked Corps Commander Multan. With the help of the Pakistan Army, it was made possible to save precious lives; he noted and added that the Pakistan Army is taking the lead in helping flood victims. The Pakistan Army has stood by the nation in every hour of trial, he further said. The Punjab Government appreciates the role of the Pakistan Army in helping people in distress; he said and impressed upon the philanthropists to lend a helping hand. The government will extend full support to NGOs and other organizations in their philanthropic work, he added.

The CM was briefed that a new rain spell would start in Koh-e-Suleman tomorrow (Tuesday) and would continue till Aug 26. There is a fear of flooding in DG Khan, Rajanpur and Taunsa once again. More than three lakh people have been affected in DG Khan and Rajanpur. The Punjab government has provided about 23 thousand tents and 36 thousand food hampers to the affectees.