It was agreed to promote bilateral cooperation in the fields of agriculture, wastewater treatment and water management. The CM said that the provision of scholarships to Pakistani students by Hungary is a welcome step. The Punjab government has created new facilities for investment and all kinds of facilities are given to foreign investors; he added and concluded that we should benefit from each other’s expertise.

Mr Bela Fazekas said that Hungary is ready to support the Punjab government in the fields of agriculture, wastewater treatment and water management. When you were the chief minister in 2006, I met you at that time too, and I remember the happy memories of meeting you. It is a good coincidence that now that you have become the chief minister again, I am meeting you once again; the ambassador said and concluded that he is an admirer of the public welfare-oriented work done by the CM. 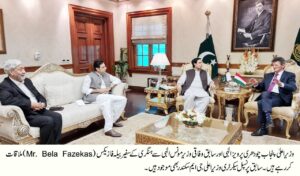