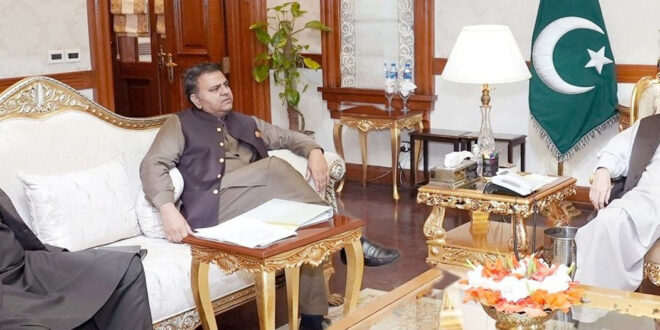 Pakistan Tehreek-e-Insaf leader Fawad Chaudhry met Chief Minister Punjab Chaudhry Parvez Elahi at his office on Friday and held a detailed discussion on the political situation and the security arrangements regarding the third phase of the real freedom march.

The CM said that fool-proof security arrangements have been made for the real freedom march and the safety of Imran Khan and the march participants will be ensured in Rawalpindi. All resources will be used to implement the foolproof security plan, he added. Allah has honored us and the provincial government is working day and night for the welfare of the people. He asserted that anybody may come or go but no political adventure would succeed in Punjab. Claims were made in the past but opponents faced defeat and they would be unsuccessful again, he added. He said that the N-League is becoming unpopular with every passing day. The Punjab government will fulfill the duty of protecting the participants of the real freedom march in the best possible way, the CM reiterated. Chairman PTI Imran Khan is the most popular leader of Pakistan who has shown the nation the way to live with sovereignty and dignity; he maintained and added that Imran Khan has given the message of true freedom to the nation and people are with him.

Fawad Chaudhry invited CM Parvez Elahi to visit Jhelum. The CM said that he will visit Jhelum at the first opportunity and a public welfare project will be announced. The best arrangements have been made for the participants. The participants have been peaceful in the past and will remain so in the future, said Fawad.