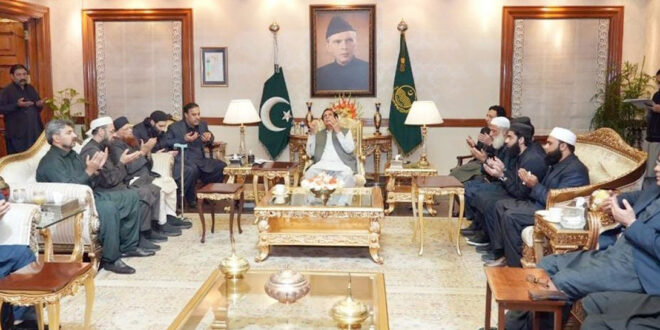 Chief Minister Punjab Chaudhry Parvez Elahi met with an Ulema delegation headed by President Wafaq-ul-Madaras Al-Arabia Maulana Muhammad Taqi Usmani in which Ulema-i-Karam paid rich tributes to CM Parvez Elahi for taking exemplary steps with regard to the service of religion during the meeting. The Chief Minister on this occasion stated that religious works are being done in a rightful manner due to the prayers and blessings of Ulema-i- Karam. CM apprised that Muthahida Ulema-i- Board Punjab Amendment Bill and University of Quran and Seerat Studies Bill is being presented in the Assembly. He revealed that soon after assuming the office of Chief Minister he immediately restored the Quran Board adding that Nazara and Quranic translation has been made compulsory for students in every school and college of Punjab. CM maintained that if the minds of students are diverted towards the religion then a strong nation will be built. One lac jobs are generated for the Ulemas and Hafizs to impart teaching in Nazara and Quran to the students. CM Parvez Elahi stated that Allah Almighty bestowed on him distinction to introduce first ever legislation for the eradication of interest from the province adding that 10 years punishment has been fixed in case of getting interest at a private level. Legislation has also been done for a staunch belief in Khatme Nabuwat SAW and for the first time Khatme Nabuwat SAW belief has been incorporated in the marriage certificate. The grade of Imam Masjid has been enhanced and they are also being given promotion. CM directed the administration not to stop NOCs of mosques without any solid reason. Maulana Muhammad Taqi Usmani President Wafaqul Madaris said that the government of CM Parvez Elahi will continue to run owing to the blessings of doing service for the religion adding that CM Parvez Elahi is redering utmost services for the religion and the ulema always pray for him. He lauded CM Parvez Elahi for doing immense work for the religion in a short span of time. Maulana Muhammad Taqi Usmani thanked Punjab government for imposing a ban on the controversial movie. Maulana Muhammad Hanif Jalandary informed that green boxes are breing installed in order to save the martyred Quranic scripts. The President Wafaqul Madaras Maulana Muhammad Taqi Usmani prayed for the prosperity and progress of the country and specially prayed for the well- being of CM Parvez Elahi. Maulana Hanif Jalandari, Maulana Ibrahim, Maulana Ahmad, Maulana Omer Abbas and Maulana Zaid were also present during the meeting. Provincial advisor Amir Saeed Rawn, MPA and Spokesperson Fayyaz ul Hassan Chohan, Rasikh Elahi, Principal Secretary to CM Muhammad Khan Bhatti, ACS(Home) Asad Ullah Khan and others participated in the meeting. 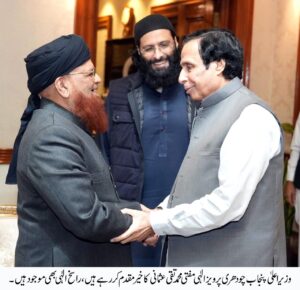