The CM announced the linking of the Lahore-Sialkot Motorway and said that the residents of Gujranwala will get immense convenience by having a communication link with Lahore-Sialkot Motorway. It will be easy for the industrialists to take their products to other cities; he added and announced that other cities would also be linked with this motorway. He noted that Lahore-Sialkot Motorway was planned in the previous tenure but unfortunately, the PML-N-led government changed the plan, which increased the cost, and many cities could not be linked to the motorway. Gujranwala is my own city, and I would visit it soon, he said. The problems of the citizens of Gujranwala will be solved on a priority basis. The government will also review the establishment of a new industrial estate for the industrialists of Gujranwala, he added.

The delegation offered a partnership with the Punjab government for the project and said that they are ready for financial support. Ch Parvez Elahi’s works speak as he has won the hearts of the people by setting up an exemplary institution like rescue 1122. We are grateful to Chaudhry Parvez Elahi for the announcement of linking Gujranwala with the Lahore-Sialkot Motorway. 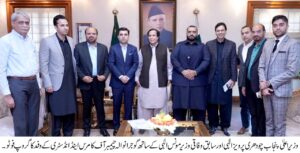