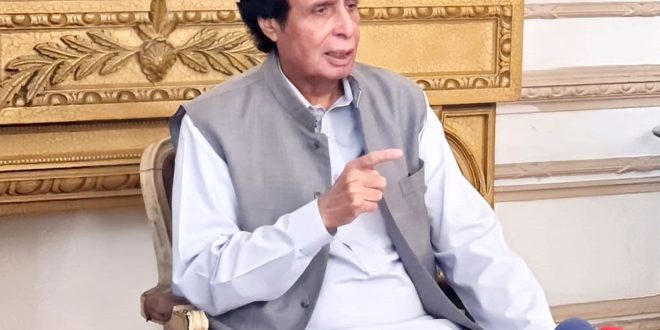 Chief Minister Punjab Chaudhry Parvez Elahi has regretted that Shehbaz Sharif has crossed the limits of enmity with Punjab and added that he has resorted to oppression with the farmers of Punjab for the sake of his allies.

In an important statement issued on Friday, Parvez Elahi stated that if the Greater Thal Canal agreement with the Asian Development Bank is not signed by December 13, the agreement will automatically expire. The cut-off date to sign the Executive Committee of the National Economic Council (ECNEC) approved project is Dec 31, 2022; he highlighted and regretted that there is no progress on the part of the federal government.

The CM explained that Punjab removed the objections of Sindh in the ECNEC meeting with relevant data and figures. Meanwhile, the repair and maintenance of the first phase of the Greater Thal Canal is also required to add more water for six lakh acres of land. Greater Thal Canal will only have water from the Punjab part and not from any other province; otherwise, this water goes into the sea, he commented.

CM Parvez Elahi elucidated the historic fact that water has been allocated under the name of Greater Thal Canal in the consentaneous water agreement of 1991. Under this accord, Kachhi Canal and Rainee Canal projects have already been completed for the provinces of Balochistan and Sindh; he mentioned and added that the Chashma Right Bank Canal project has also been approved for Khyber Pakhtunkhwa. However, obstacles are being created in the completion of the Greater Thal Canal in the garb of enmity with Punjab, he deplored.

The CM further explained that the PTI-led government restored the Greater Thal Canal project and arranged funds as this vital project was in cold storage since 2007. The loan agreement with the Asian Development Bank is yet to be signed and the tenure of the loan agreement would lapse if it is not signed by December 31, 2022, he added.

In the current session of ECNEC, all the provinces have plans for flood rehabilitation, but not a single project of Punjab, even Punjab has not been given a single penny by the federation for the flood victims, concluded Parvez Elahi.