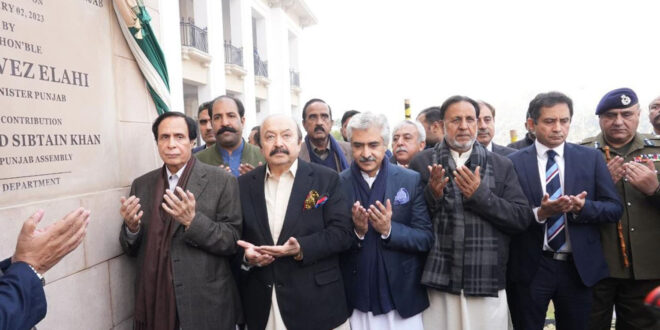 Addressing the ceremony, the CM stated that the political norms of tolerance and fraternity have been promoted in the province. We have contained the opposition in good work but PMLN is an expert in wrongdoing. The PMLN is the king of doing bad things, it doesn’t matter to them and there is no one to stop them. They come to power after 5/10 years and leave after destroying all the previous development. They catch the train from the same station where they had disembarked and the train of PMLN is composed of destruction, he regretted. Just like the last train that arrived at the time of the creation of Pakistan whose half of the passengers were butchered; this is the same sort of train of the PMLN, he stated.

The CM noted that in the history of Pakistan, under the leadership of Imran Khan, the Punjab assembly has done the maximum legislation. Legislation for the service of religion is Imran Khan, PTI and our honor; he maintained and added that countless assemblies of the world have been formed in 300 years but police did not enter any assembly. There was once a murder in the British Assembly Westminster, which became an ugly stain. Though a murder did not happen here, it was no less than that. The police trespassed the Punjab assembly at the behest of our turncoat deputy speaker and other henchmen of the PMLN. The police can never enter the Assembly and attack in this way, he added. PMLN’s private workers and goons entered and created havoc in the assembly and injured women. A member of the assembly Aasia Bibi was seriously injured, but by the grace of Allah Almighty, she has recovered. The intrusion of police inside the Punjab assembly cannot be forgotten in any way, he added. Police intrusion and rioting in the Punjab assembly is a dark chapter of history and this incident is a stigma on the face of PMLN and it will remain a part of history, the CM stated.

The CM said that Allah Almighty has paved the way for the position of chief ministership. Allah Almighty has provided an opportunity and I am thankful to Allah Almighty for getting the opportunity to serve the masses. The train of development has resumed its work from where it left off. We had to wait for 10/15 years for the completion of the new assembly building. We are always thankful to Allah Almighty for the fulfilment of our obligations. I didn’t know that Allah Almighty would grant the position of chief ministership. In 1938, the old building of the Punjab assembly was built, when I became Speaker, I first built a mosque, laid the foundation stone of the new building and the honor of inauguration was also given by Allah Almighty, he added. Chief Architect Zara’s design was selected for the new assembly building. NCA’s team built a state-of-the-art dome. Turkish experts called the dome of the new assembly building a miracle. A new assembly building is not important, legislation is important. Khatme Nabuwat (ﷺ), Nazra and translation of Quran, Muttahida Ulema Board and Khatam-e-Nabuwat (ﷺ) University Act have been passed. Khatam-e-Nabuwat (ﷺ) University will be provided with books about religious knowledge. Rescue 1122, free medicines in an emergency, tripled salary for doctors and Jubilee Town Dental Institute Acts were also passed. The scholarship for girls in south Punjab was increased to 100%. The Public Defender Act will provide free legal aid to the people up to the Supreme Court, he noted. The credit for good work would go to us; he said and regretted that kitty was burdened by creating obstacles in the construction of the new block of the assembly for ten years. It is unfortunate not to maintain good political traditions. We have always established an atmosphere of brotherhood and good political traditions. Unfortunately, opponents have destroyed our good traditions. If one does not follow good traditions, politicians are defamed, he added.

Earlier, Chief Minister Parvez Elahi said, after the formal inauguration of the new building of the Punjab assembly, that the need for the next 100 years has been fulfilled as it could accommodate 500 members. Ayes Lobby for 200 people and Noes Lobby for as many people have been made. There is a capacity of up to 800 people for the Speaker’s Chamber, officers, media and visitors. He said that offices have been created for the Chief Minister, Speaker, Deputy Speaker, Ministers and Leader of Opposition. Apart from this, 3 committee rooms and a conference room, library and cafeteria facilities are also provided besides parking for 400 vehicles. 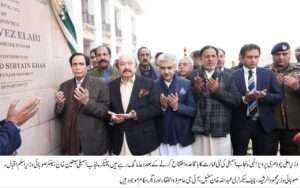