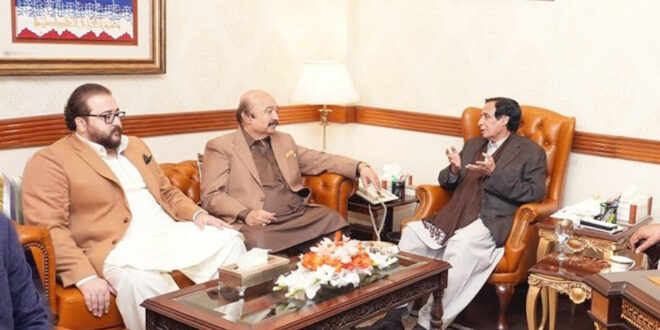 Chief Minister Punjab Chaudhry Parvez Elahi chaired a consultative meeting in which Speaker Punjab Assembly Muhammad Sabtain Khan, Provincial Minister Raja Basharat and MNA Hussain Elahi attended. The present political scenario came under discussion along with overall political situation and future strategy was reviewed during the meeting. The Assembly Members were paid rich tributes for reposing their trust on CM Parvez Elahi in the Punjab Assembly. The Chief Minister while talking on the occasion stated that the Governor Punjab by withdrawing de-notification order endorsed our point of view. CM maintained that the vote of confidence proceedings will be effective due to withdrawal of notification by Governor Punjab. CM denounced that Rana Sanaullah is making a nefarious attempt to distort facts and mislead the nation adding that Rana Sanaullah is making an interpretation of judicial verdict of his own liking. Rana Sanaullah and his leadership are adept in making lies and have no credibility among the masses. Rana Sanaullah and Atta Tarar faced a humiliating defeat in Punjab and those aspiring to take control of Punjab government had to flee during night. CM stated that Allah Almighty bestowed on them success and we will clinch success in future as well. The negative politics of PML-N was outrightly rejected by the people of Punjab and all the conspiracies being hatched by their leadership were discarded by the masses. Those trying to hold the reins of Punjab Assembly will keep on repenting and sobbing. CM vowed to continue serving the people of Punjab. Speaker Punjab Assembly Muhammad Sabtain Khan said that the Punjab Assembly completed the vote of confidence proceedings according to the constitution and law. Provincial Minister Raja Basharat said that the Governor of Punjab accepted the legal position of vote of confidence and withdrew denotification order. The Governor’s counsel declared the Punjab Assembly proceedings constitutional and lawful. Rana Sanaullah is making a false propaganda to overcome his depression and as a face-saving. Social and a political personality Akbar Khan and other officials were also present on the occasion.