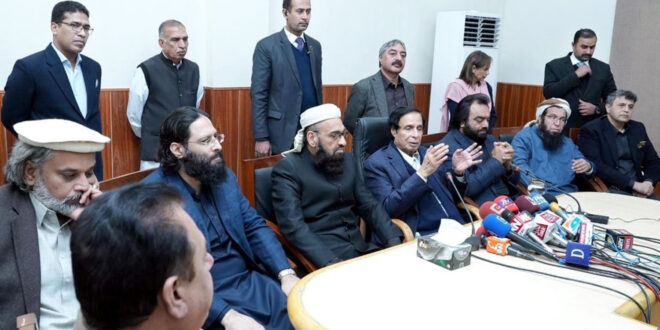 Chief Minister Punjab Chaudhry Parvez Elahi inaugurated Pakistan’s first Khatamun Nabiyeen (ﷺ) University and laid the foundation stone of Jamia Masjid Khatamun Nabiyeen (ﷺ) in Lahore today. CM While talking with the media representatives on the occasion said that PML-N will face a humiliating defeat in the elections and PML-N will meet with same failure which PPP has already gone through. Shehbaz Sharif poses to be very clever and shrewd and keeps waiting for hidden help but now he has badly been exposed. Shehbaz Sharif will keep hiding his face after elections. Ishaq Dar used to say that he would bring dollars but they took away dollars abroad. PML-N is getting weaker every passing moment and we gave a big surprise to PML-N in the vote of confidence. Now President Alvi will ask them to take vote of confidence and they will find themselves in a perilous situation. Imran Khan has made an appropriate arrangement of Shehbaz Sharif and now he will have to take vote of confidence which he will fail to obtain from the National Assembly. Imran Khan is a noble person and has the spirit to make his country prosperous. The youngsters are standing with Imran Khan and are working for him. Imran Khan is an honest person and does everything with dedication to ensure welfare of his country. Imran Khan’s hard work and political sagacity is bearing fruits and the whole nation is united under the leadership of Imran Khan. I said to Imran Khan that Punjab Assembly is a trust given by him and he can take it back whenever he wants. I duly fulfilled my promise made with Imran Khan. CM apprised that KPK Assembly will also be dissolved day after tomorrow and now only general elections will take place. Shehbaz Sharif will not get votes and no signs of unity and solidarity are seen among the ranks of PDM. PDM is facing disunity as MQM is not siding with PDM anymore. Rana Sanaullah kept on misleading people that hidden help is in the offing. Rana Sanaullah has gone to see Nawaz Sharif along with a team of liars and Nawaz Sharif will take him to task. CM stated PML-N is seeing a horrible defeat in the general elections and for this reason Nawaz Sharif is not returning to Pakistan. The opposition parties are finding a lame excuse to escape from elections as Nawaz Sharif himself asked them to hold elections in the country. CM stated that due to the special blessings of Allah Almighty bestowed on him he wholeheartedly performed his duties to serve the religion and did work of four years in mere four months. A visible positive change is seen in every sector and department. The common people are overjoyed with the establishment of new districts and divisions. We will not lose elections where new divisions, districts and tehsils are established. CM informed that Talagang district has been kept with Rawalpindi and has not been added with Mianwali. The scope of Rescue 1122 has been stretched to small streets and whenever given more opportunity then Rescue 1122 service will be launched from villages as well. Sindh has also launched an emergency service under the name of Rescue 1122. CM highlighted that the common man will be benefited with the launching of Blue Line transport system in Lahore adding that hybrid buses will soon be seen running for the masses in Lahore. Parking plazas and shopping malls will be established on the big stations of Orange Train including Anarkali. Cancer and cardiac diseases will be treated in Pakistan and there will be no need to go to India for undergoing such treatments. CM highlighted that while holding the office of Speaker Punjab Assembly he got many Acts and laws passed from the Assembly. CM revealed that we would make 300 megawatts small dams on River Chenab. Information technology will be promoted in Punjab by California becoming a Sister State. CM highlighted that he had made a solemn pledge on the Shrine of Holy Prophet SAW to serve the religion with regard to Khatme Nabuwat (ﷺ) and duly fulfilled his resolve. The flour prices are rapidly decreasing by bringing surplus wheat in the market. We are striving to enlighten the new generation with the teachings of Quran and Seerat-e-Nabvi (ﷺ). Now no one can become a doctor or an engineer without reciting Nazara and Quran. We made a law passed from the Punjab Assembly to award 10 years punishment on getting usury at a private level. CM highlighted that fraudulent incidents have been eliminated by incorporating Khatme Nabuwat (ﷺ) affidavit in the marriage certificate. CM outlined that he inaugurated Khatamun Nabiyeen (ﷺ) University today and will formally start functioning soon. CM disclosed that a mosque and a hostel will also be established in the Khatamun Nabiyeen (ﷺ) University. CM was given a briefing about Khatamun Nabiyeen(SAW) University and Khatamun Nabiyeen(SAW) Mosque. Hafiz Ammar Yasir, Rasikh Elahi, Maulana Hanif Jallandari, Sahibzada Hamid Raza, Chairman Ruet-e-Hilal Committee Pakistan Maulana Abdul Khabir Azad, Khateeb Data Darbar Mosque Mufti Muhammad Ramzan Sialvi, former President Bank Of Punjab Hamesh Khan, Secretary Housing Asif Bilal Lodhi, Commissioner Lahore Amir Jan, DGPR Rao Parvez Akhtar, Secretary Auqaf Mian Abrar, DG Auqaf and concerned officials were also present on the occasion. 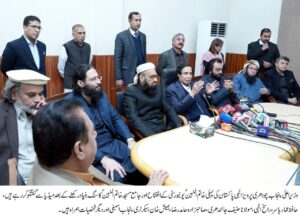 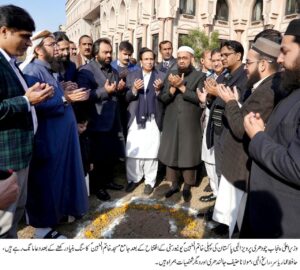 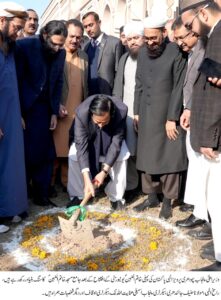 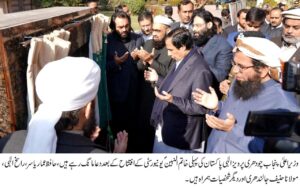