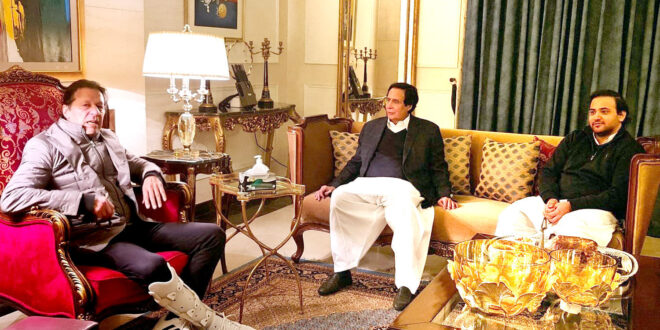 Chief Minister Punjab Chaudhry Parvez Elahi said that he held consultations with Chairman PTI Imran Khan on the names of Caretaker Chief Minister as we have to give three names for the Caretaker CM to the Governor Punjab. CM informed that after holding consultations with Imran Khan three names Ahmad Nawaz Sukheri, Naseer Ahmad Khan and Nasir Saeed Khosa for the Caretaker Chief Minister have been agreed upon. We are sending these three names for the Caretaker CM to the Governor Punjab. CM stated that if the opposition ponders over it with an open heart then one name can be decided out of these three names. CM was talking with the media representatives after meeting with Chairman PTI Imran Khan at Zaman Park late night today. CM apprised that he has summoned party leaders meeting tomorrow in which Senator Kamil Ali Agha will also participate as important consultations will be held in the meeting. CM stated that the wailing and crying of PML-N is continuing and will be taken to task adding that Shehbaz Sharif does not get sleep even after taking sleep inducing pills. CM pointed out that look at the faces of PML-N leaders as they are looking perturbed and PDM leaders have lost their political credibility. MNA Hussain Elahi and Hafiz Farhat Abbas were also present on the occasion.