Chairman PBIT and others call on CM Chaudhry Parvez Elahi

Chairman Punjab Board of Investment and Trade (PBIT) Qaiser Iqbal Baryar, Saleem Baryar and Ahsan Saleem Baryar called on Chief Minister Punjab Chaudhry Parvez Elahi at his office and discussed matters of mutual interest and exploitation of investment opportunities in the province.

Qaiser Iqbal Baryar thanked the CM for appointing him as chairman and provided an update on the favorable environment and measures taken to increase investment in the province. 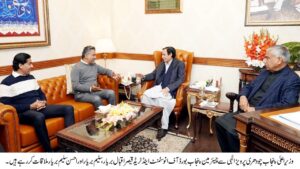