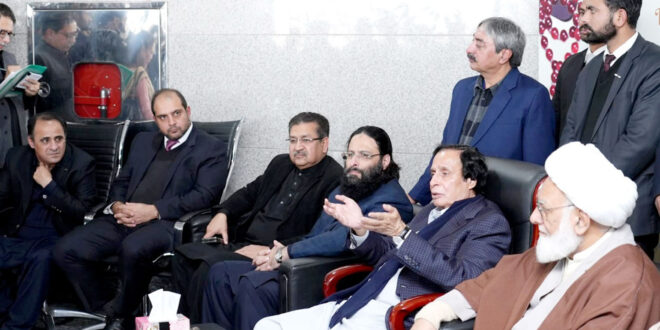 Chief Minister Punjab Chaudhry Parvez Elahi inaugurated Hurmat-e-Quran Kareem Portal at Punjab Information Technology Board today. CM apprised that Hurmat-e-Quran Kareem Portal will work under a technology based on artificial intelligence. The portal will identify fake materials relating to Quran Kareem available on the websites. Hurmat-e-Quran Kareem Portal will issue alert warnings about the negative materials relating to Quran on the websites to the Quran Board and concerned institutions. The portal will also issue alerts to the concerned institutions in order to block the controversial material and for taking stern action against elements involved in uploading such a material. CM stated that through Hurmat-e-Quran Kareem Portal the websites of those involved in doing condemnable activities will be blocked. Registration and monitoring of publishers and E-publishers will also be carried out with the help of this system. CM while talking with the media representatives stated that the Punjab government has taken a milestone step by making Hurmat-e-Quran Kareem Portal and also to check disrespect to Quran-e-Kareem or making changes. PITB has developed a software in collaboration with the Quran Board which will issue a prompt alert on the publication of a change in the name of Khatamun Nabiyeen (ﷺ) or a change in the Ayat or translation of the Holy Quran. CM informed that one software system will also be installed in the office of Mutahida Ulema Board and the other will be installed in PITB. The person found involved in uploading a wrong material on the website will be immediately taken to task and the website will also be blocked. PITB has itself developed this software. It is a big service to the religion and we will also provide this software to Saudi Arabia, UAE, Turkiye and Iran. The Ulema-e-Karam delegation will visit Saudi Arabia, UAE, Turkiye, Iran and will take forward this noble work of religion. CM Parvez Elahi stated that Chairman PITB Faisal Yousaf, former Special Assistant Information Technology Dr. Arslan Khalid and his team deserve congratulations on making Quran Portal. CM acknowledged that the Quran Board, Ulema-e-Karam and PITB had done a splendid work in a short span of two months. CM lauded that Dr. Arslan Khalid, Faisal Yousaf and his team has done a great service to the religion by making Hurmat-e-Quran Kareem Portal. CM in reply to a question to the media stated that Imran Khan is an honest and an upright leader adding that Imran Khan is the only leader after Quaid-e-Azam who does not speak a lie. Imran Khan has the spirit to serve the masses while the Sharifs start speaking lies after getting up in the morning. The Sharifs and Rana Sanaullah keep on telling lies till late night. We have to make our own Opposition Leader and will turnout Raja Riaz. Raja Riaz should himself feel ashamed and should quit the post of Opposition Leader. CM Parvez Elahi highlighted that whatever work he has been done, we have done it with the blessings of Allah Almighty and with our noble intentions. CM stated that he wants to please Allah Almighty and His humanity. We are aware about the thinking and intentions of Election Commission as they are making false cases against Imran Khan daily. We gave three names of impartial personalities for the Caretaker CM slot and gave the name of Shehbaz Sharif’s own Cabinet Secretary Mr. Sukhera. We also gave the name of Mr. Khosa who remained Chief Secretary of Shehbaz Sharif and Commissioner as well. We will not let the Caretaker Chief Minister to perform his duties being made by the Chief Election Commissioner and will go to the Supreme Court. In reply to another question CM said that a detailed meeting with the PML-Q office-bearers was held and we are moving forward by holding consultations. The office-bearers of PML-Q will hold consultations with the party workers at the grassroots level. After holding consultations we will make a decision with regard to PTI. If a politics is done then it is done for the welfare of a province and for the country. Whenever elections are held we will vigorously contest elections. Allah Almighty will decide about PM and CM slots. CM disclosed that he did not make any promise with anyone for not dissolving the assembly adding that he had already handed over in writing to Imran Khan about the dissolution of Punjab Assembly. In reply to a question CM Parvez Elahi revealed that he had established Kotla Arab Khan Hospital and now we are launching its expansion work adding that cases will be registered against those miscreants found involved in causing rumpus. Shehbaz Sharif and Zardari have their own affairs and we are doing work with our noble intentions to attain the blessings and will of Allah Almighty. CM Parvez Elahi stated that PML-N leaders should be asked about the return of Nawaz Sharif. CM apprised that a second tower will be established with Arfa Kareem Tower likewise twin tower. CM denounced that everyone focused his attention on minting money and no one thought about exporting software. If Bangladesh can earn billions of dollars by exporting software then why not we can earn? Rasikh Elahi, Maulana Muhammad Hussain Akbar, Yousaf Badozai, Chairman P&D Board, Secretary Auqaf, Chairman PITB Faisal Yousaf, Hamesh Khan, Dr. Tahir Raza Bukhari, Umer Daraz and concerned officials were also present on the occasion. Chairman PITB Faisal Yousaf gave a briefing to CM Parvez Elahi about the salient features of the portal. 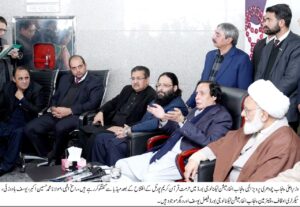