Lahore, January 22: Pakistani origin American businessman and leader of the Democratic Party Tahir Javed met with the Chief Minister Punjab Chaudhry Parvez Elahi at CM Office. Tahir Javed while appreciating the exemplary steps of CM Parvez Elahi being taken for the well-being of the people of Punjab in a short tenure stated that under the able leadership of CM Parvez Elahi the Punjab government undertook five years’ work in just five months. Tahir Javed acknowledged that CM Parvez Elahi has set a new example of rendering public service likewise his previous tenure. Tahir Javed stated that declaring Punjab and American State California a ”Sister State” is a milestone step of CM Parvez Elahi and congratulated CM Parvez Elahi from the bottom of his heart. CM while talking on the occasion said that the agreement to declare Punjab and California a ”Sister State” will promote trade, economic and business relations between Punjab and California. CM highlighted that bilateral trade will enhance between Punjab and American State California adding that relations in education, health, information technology, environment and culture sectors will also be promoted. CM maintained that this agreement will further augment bilateral relations between Punjab and California. CM lauded the Pakistani people residing in America for vigorously helping the flood-affectees and praised the philanthropists for generously giving their donations in the CM Flood Relief Fund. CM apprised that the Punjab government utilised the donated amount for the rehabilitation and settlement of the flood-affectees in a transparent manner. 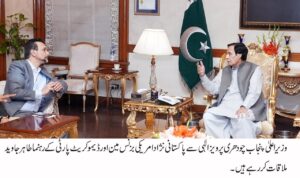